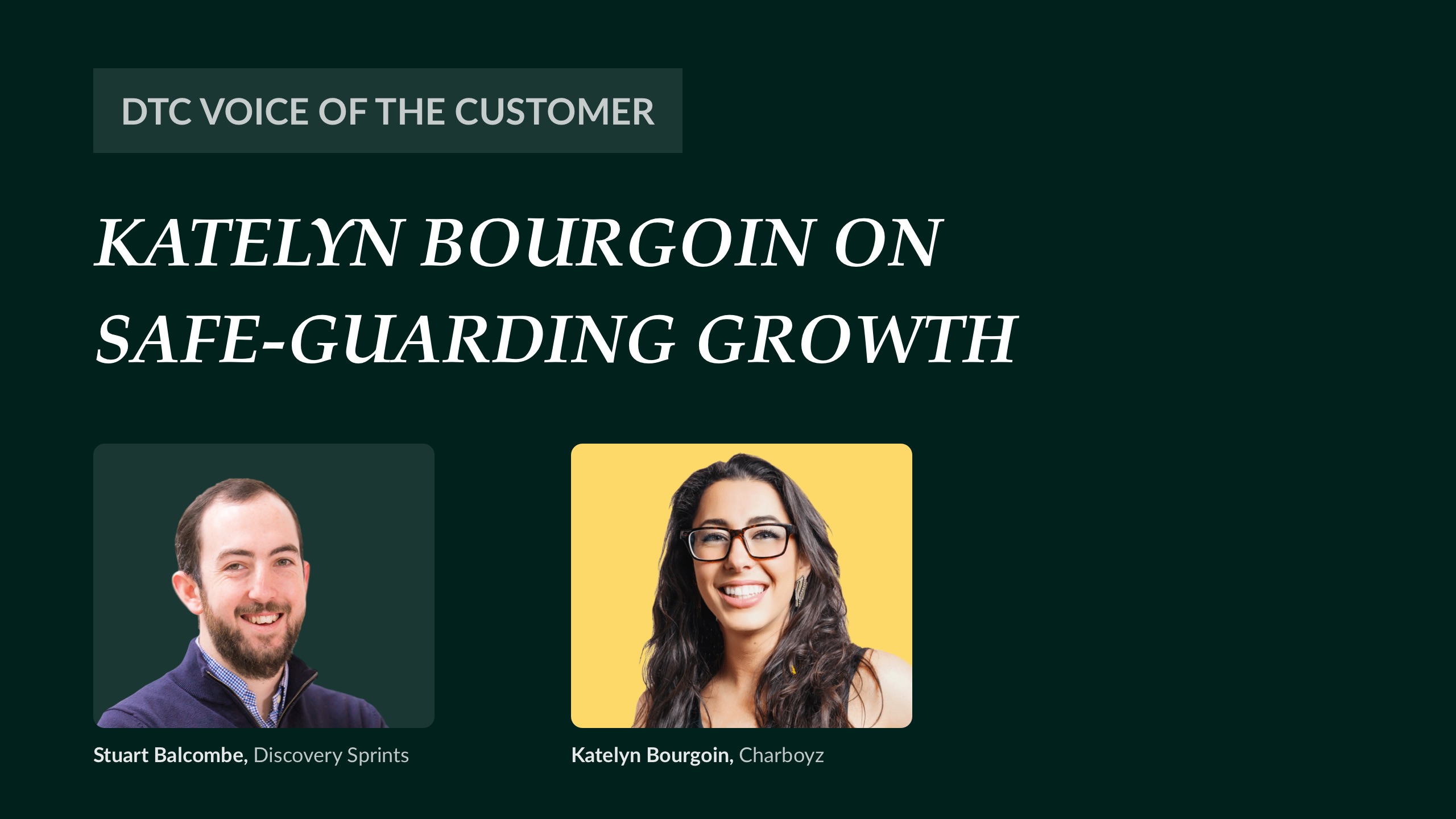 Understanding why your customers buy and what they are ultimately hoping your products can help them do, feel, and achieve is arguably the closest thing to a silver bullet that exists in marketing. Today I’m joined by Katelyn Bourgoin to chat about her experience launching a new DTC brand during Covid and the incredible insights she uncovered in customer insights.

Listen to the episode above, or check it out in your favorite podcast app.

When you come up with something new it’s very easy to dive right in - but a little research can go a long way towards ensuring true success.‍
‍

“we thought the idea was fun. He was interested in it from a passion perspective. But of course me being a customer discovery nerd, and a, you know, somebody who really cares about making sure the business is right, and I've made some mistakes in the past and my own businesses. I don't want to just run into something just because we think it's a good idea.”

5:20 - Let the customer steer the conversation

“we wanted to talk to people who shop at the farmer's market regularly, people who had the food boxes, and people who were investing a lot in grilling. And so we identified those kind of like three different markets and talked to people who fell into them. And in our discovery we learned so much. We followed the same type of research method that I would teach to my students,  which was: don't just ask people about what they want or tell them your idea. In fact, we told everyone when we got on the call with them, ‘we're working on an idea at the end we'll tell you a little bit about it, but I don't want to tell you anything about it yet.’”

It’s easy to assume you can’t contend with a successful competitor. But customer research can help tease out the holes and dissatisfactions with competitor strategies and highlight opportunities where you can win.
‍

“I was thinking from a product perspective. I'm like, ‘how are we gonna compete with these hugely funded companies that everything looks so professional? And are we going to be able to create a similar experience?’ Because we were bootstrapping the whole business. And it turns out that that was the piece that actually was a turnoff for a lot of people. They didn't want to have everything wrapped in plastic. In fact, you know, the bare minimum of packaging, the better.”

Charboyz originally assumed their target audience was farmers market shoppers - but it turned out their sweet spot was Suburban Jock Dads.
‍

“we ended up identifying that target audience being these food curious - Suburban Jock Dad was the original category. You know, he was like, into food, kind of had become a passion, probably used to be somebody who would go out every weekend prior to having kids, and now was looking to rebuild that social community through his now suburban life. And so it was really, really lots of interesting stuff. And that led us to our first version of the product.

when we launched our first box, we didn't position it as a food box. We positioned it as a virtual barbecue and you could buy your box and barbecue with a hundred other people, and we're going to do it online and there's going to be online cooking classes. And we partnered with two other businesses, a beer company, and a seasoning company.”

13:33 - Customers want to please you. Push for honesty instead

Katelyn found that customers were often embarrassed to reveal their true shopping habits. But if customers are shopping at Costco and Safeway, that’s what you need to know.
‍

“if we asked questions like, you know, ‘tell me about where you get the bulk of your meat.’ They would say, ‘Oh, well, there's this butcher.’ And then I'd say, ‘okay, so how many times in the last month have you shopped there?’ And so I would get them to start giving me timestamps and then it became, ‘well, you know, we really only go there when, you know, my wife's parents are in town and we want a really special cut. Most of the time it comes from Safeway.’ And they would say that almost shamefully. And it's like, ‘No, no, no, don't worry’...people will definitely lie to you if you don't know how to dig deeper.”

“we realized that they were planning their social events around our boxes. These were not Tuesday’s dinner for them. This was ‘I'm having people over on the weekend and we're getting together and we're going splits on Charboyz and we're having a Charboyz experience.’ Like there were people who had bought every box and they said that they had their Charboyz crew.

people's lives and their celebrations and their events do not surround around our monthly launches. They have actual things going on in their life all the time. And so what we're doing and what we're doing reworking right now, which I'm so excited about, is we're going to have what we're calling Evergreen Boxes that are delivered every Friday. Because the other thing we learned very clearly is we are not a Tuesday dinner thing - we are the weekend's exciting meal.”

22:12 - Balance popularity and ease of execution

The original Charboyz model was working. But due to fulfillment struggles, Bourgoin and her husband were already brainstorming ways to evolve.
‍

“The actual fulfillment side is insanely hard. Logistically, getting fresh food to people is so effing hard. And I'm so grateful for every box that arrives on my doorstep now because I know what it takes to actually get that box to that person. But the marketing side was almost effortless...it wasn't because people wanted to have a convenient dinner on Tuesday night. It was because it was something to look forward to.”

Once you have committed fans in place, catering directly to them is a win-win.
‍

“I really want to build a club-like atmosphere for Charboyz. I want people to feel like they're part of something. And so thinking about, it's not necessarily going to be a membership that you need to buy, but it's probably going to be something that you get indoctrinated into when you've done a certain number of activities. And it's kind of like a private, like secret thing. And so the thing that I want to do next, is we already have some superfans out there - and I want to talk to them about who they're sharing with, and how they're sharing with, and start thinking about how we can leverage word of mouth even more.”

27:59 - Use customers to overcome roadblocks

You don’t ever have to stop customer research. Make it a regular best practice to avoid feeling stuck.
‍

“you're always going to have new challenges in your business that you want insight from your customers on. And having a couple of conversations can often save weeks of going in the wrong direction. So as you hit a roadblock and you're feeling unsure, that's a signal of, maybe I should talk to a couple of customers. Maybe I should go out and learn from people that I know are using it for this reason, or that I know are struggling with this problem’ and use those as opportunities.”

Get new interviews with DTC operators and their customers in your inbox every Thursday.